In addition, you will also discover:

Endogamy is a word that is frequently tossed around in genealogy circles. But what does it actually mean?

Most importantly, how do you know if you have endogamy in your own family tree?

As you will see by the end of this post, endogamy is not strange or uncommon. In fact, we all have it to some extent.

What is the definition of endogamy?

Endogamy is the custom or practice of marrying within the same social or ethnic group, local community, or religious tradition. In addition, endogamous groups tend to require this practice, either by law or tradition, and discourage marriage between members of their group and outsiders.

Even though endogamy is usually occurs where it is encouraged, it isn’t always seen only because it is required. For example, sometimes there are limited partners to choose from, and so endogamy occurs because there simply are no outsiders.

In many parts of the world, endogamy is no longer fashionable, especially in societies where people have seemingly unlimited access to unrelated (or very distantly related) partners. This is why many people tend to be surprised when they find evidence of endogamy in their family tree.

Historically, however, it just wasn’t a big deal.

What is an example of endogamy?

There are endless examples of endogamy around the world. Well-known examples of endogamy include the Ashkenazi Jewish communities of Eastern Europe and the diaspora, descendants of early European immigrants to the British Colonies in North America, French Canadians, and those with indigenous North and South American ancestry, including many people with Mexican ancestry.

Even though those large groups of people that I mentioned above are some of the most well-known examples of endogamy, we don’t have to look very hard to find other endogamous groups. For example, my own Slovak ancestors were from the same isolated region of Slovakia, and I have found ancestors repeated multiple times in my Slovak family tree.

What is the difference between pedigree collapse and endogamy?

Sometimes, endogamy is confused with the idea of pedigree collapse. However, they are not the same thing.

Just yesterday, I was reading through a document that one of my great-grandfathers wrote about his life history. He mentioned that he briefly dated one of his second cousins while he was a student in high school.

Eventually, he went off to college, met my great-grandmother, and the rest is history. For a while, however, it did look like his life might have taken a different course.

It makes perfect sense that my ancestor was dating a cousin. They spent time in the same social circles and were probably encouraged to spend time with each other.

In fact, based on what I could ascertain from the story of my grandfather’s second cousin’s life, her parents died while she was still a child. After the death of her parents, she went to live with an aunt and uncle in Chicago.

It seems perfectly plausible that she may have been encouraged to consider marrying her cousin, as they came from families with a similar background. In addition, my great-grandfather’s family could have encouraged the match because even though she no longer had the financial stability that her parents could have offered her, the fact that she was a cousin may have rendered that fact irrelevant.

Are most marriages Endogamous?

In a technical sense, many marriages are endogamous. This is because most people marry people who are from the same social group as they are, and they tend to share language, religion, and cultural similarities.

This happens even when people do not try to marry within their group on purpose. Endogamy often occurs because there is little or no access to people from outside groups due to factors beyond control, such as geographic isolation.

Furthermore, people from the same cultural group likely share common ancestors, even if they are probably only very distantly connected and unaware of who their shared ancestors might be.

When we use the term endogamy, however, we are usually referring to marriages between closer family relationships, such as second, third, and fourth cousins. These cousins may not know exactly how they are related, but they likely do know that they have some sort of family connection – even if it is distant.

How does Endogamy affect DNA?

Endogamy can affect our DNA and relationship with our genetic matches because of the way that DNA is inherited. While we do not inherit DNA from all of our ancestors, we do inherit it from some of them, and even after several generations, we are likely to have at least one small segment that was passed down from any given ancestor from that generation.

If we share several ancestors within the past 6-8 generations with a DNA match, we might have multiple DNA segments in common with the match, since we both might have inherited the same segment passed down from all, or most, shared ancestors.

Endogamy can often skew the total amount of DNA that we share with a distantly-related DNA relative because of the multiple shared segments. A higher amount of shared DNA can lead us to mistakenly believe that our most recent common ancestor is more recent, and the genealogical relationship closer, than it really is.

I hope that this post has helped you understand a bit more about exactly what endogamy is, how it affects our family tree and DNA matches, as well as which factors influence it most.

If you have any questions about something that you read in this post, or if you would like to share your own example of endogamy in your family tree, I would love to hear from you in the discussion below. 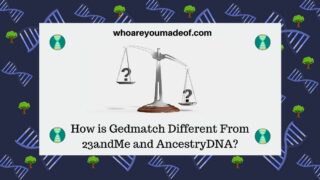 ← Previous
How is Gedmatch Different From 23andMe and AncestryDNA? 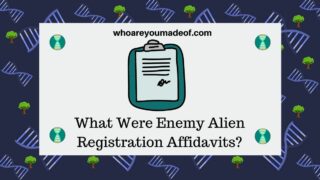 Next →
What Were Enemy Alien Registration Affidavits?
Click here to cancel reply.