What is a Fourth Cousin?

What is a fourth cousin? How many fourth cousins does the average person have? In this post, you’ll learn the answer to these questions, as well as:

What is a fourth cousin?

To explain the graphic even further:

What is a fourth cousin once-removed?

When two cousins share the same common ancestor but don’t share the same number of generations in descent from said ancestor, we use the term “removed”.

The person who is the closest to the common ancestor sets the cousin-relationship type (i.e. first/second/third/fourth cousin) and then the “removed” is calculated from that’s person’s generation level to the other cousin.

What is a half-fourth cousin?

For some people researching their family tree, distinguishing between full and half-fourth cousins is very important. This is especially true when it comes to those who use DNA to research their family trees.

How many fourth cousins do I have?

The actual number of relatives that you have on any generation depends on lots of variables.

For example, if all of your great-great-great grandparents had lots of kids, and all of those kids survived to adulthood and had lots of kids themselves, then you might have more fourth cousins than the average person.

Alternatively, if your ancestors and their descendants were affected by natural disasters, wars, famines, and illness, you might have fewer fourth cousins than average.

When people ask if two people are “blood related”, what they might be asking is if fourth cousins share DNA. You will only share DNA with about 50% of your possibly 940 4th cousins.

This is because we don’t actually share DNA with all of our relatives.

If you have 940 4th cousins and all of them took a DNA test, statistics tell us that only about 470 of those cousins would show up as DNA matches to you. In other words you are related genealogically to all of your fourth cousins but you might not share DNA.

Furthermore, if your fourth cousin is a half-fourth cousin, there is a higher chance that you will not share any identical DNA.

If you have any questions about something that you read in this post, or if you would like to share your own experience finding fourth cousins, I would love to hear from you in the discussion below 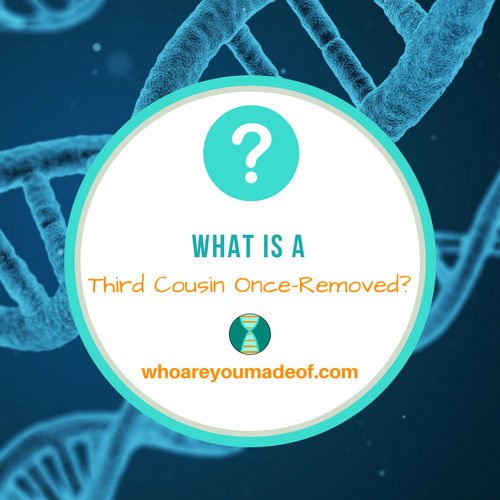 ← Previous
What is a Third Cousin Once-Removed?

Next →
How Does DNA Show Your Ethnicity?
Click here to cancel reply.

How to Know if You Have Endogamy in Your DNA Matches - Who are You Made Of?