Are You Confused About Germanic Europe DNA?

Did you get Germanic Europe in your Ancestry DNA results? Were you surprised to see it? In this post, I’ll help you answer some of the most common questions about this DNA region.

Note: This is a companion post to “What is the Germanic Europe DNA ethnicity on Ancestry?“, so don’t forget to check it out after you read this article.

What is Germanic Europe?

The Germanic Europe area was settled with Germanic-speaking peoples, thus the name “Germanic Europe”, thousands of years ago. Countries that still speak Germanic languages are generally referred to as comprising Germanic Europe.

Over the course of the centuries, these tribes pushed into other parts of Europe, displacing some peoples and admixing with others. Other groups, such as Celts, Romans and Slavic groups, served as a balancing force, preventing complete Germanic domination in Western and Eastern Europe.

Are you surprised at how much Germanic Europe DNA you got in your results?

Now that you know more about Germanic Europe and the meaning of having DNA from that region, there is a chance that you might feel that you’ve received these results in error. Based on my personal observations, this is most likely to occur when you have ancestry in a region adjacent to the Germanic Europe area.

In order to determine your ethnicity percentage, Ancestry DNA runs your DNA through their software algorithm based on the latest science. Not every realizes, however, that Ancestry also reports what some might call a “confidence level”.

In order to determine the confidence level, Ancestry randomly samples portions of our DNA 1,000 times. The lowest and highest results of those random samples are reported in the “range” listed below our ethnicity region.

In the image below, you can see that I am shown to have 40-43% Germanic Europe DNA:

While I don’t think that ethnicity estimate science is at the point (yet) where I could say with 100% confidence that I absolutely, definitely, without a doubt, have ancestry from this region, the 40-43% range gives me high confidence that I can trust these results.

Is Germanic DNA the same as German?

Not necessarily. People in Germany have Germanic ancestry, but not everyone with Germanic DNA is German. People from more a handful of countries could find that their heritage can be traced back to the Germanic peoples who settled their region many centuries ago.

Can French, Dutch, or Flemish ancestors show up as Germanic DNA?

Many people with Dutch ancestry (i.e those with roots in the Netherlands) will find that some of their heritage will show up as Germanic Europe on Ancestry DNA. People from this region might also show a genetic influence from Scandinavian countries, France, or even the England, Wales, and Northwestern Europe DNA regions.

There is currently no region on Ancestry that only encompasses the Netherlands or Belgium.

People with recent ancestry from France, however, might find that they inherited DNA from the France DNA region on Ancestry. Even so, the Germanic Europe DNA region covers parts of western France, and DNA from either region is completely possible.

What is the difference between Germanic Europe and Northwestern Europe?

It is difficult to have a concise answer on this question. If you look at the map of the England, Wales, and Northwestern Europe region, you’ll notice that it overlaps with the western part of the Germanic Europe region. This overlapping region has proven complicated for geneticists.

If you find yourself expecting Germanic Europe but finding Northwestern Europe on your DNA results (or vice versa), the best thing to do is begin to research your family tree with a focus on documentation. I wouldn’t worry too much about the discrepancy between the two regions.

I always build my family tree on Ancestry because it is very easy, and it’s also free to get started and it’s always free to access your tree. A subscription is highly recommended, however, because it makes it even easier.

Read more: What is the England, Wales, and Northwestern Europe DNA region on Ancestry DNA

I hope that this post has helped you understand more about your Germanic Europe DNA! If you have any questions about something that you read in this post, I would love to hear from you in the discussion below.

← Previous
What are ThruLines™ on Ancestry DNA? 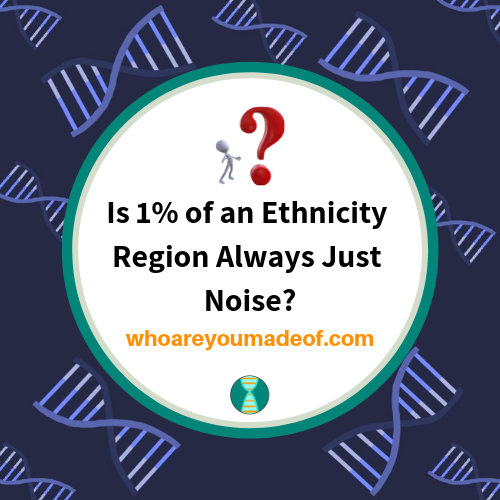 Next →
Is 1% of an Ethnicity Region Always Just Noise?
Click here to cancel reply.

Hello. I recently hard my dna done and my great grandparents and grandma were Italian. It shows I’m 49% Germatic Europe and 48% England Northern Europe I’m so confused by these results. Can you help clarify for me

What do you say you are if you have Germanic Europe and england and northwestern europe ..?

For example your from italy your italian?

My DNA results showed mostly Germanic Europe and I was quite confused. My Mother, Giovanna is born in Italy and my Father family were of Russian decent. I am still confused but the literature shows that Germanic Europe may incorporate other areas.