If you have Mexican ancestry, you might be wondering whether or not you have Native American DNA.  Or maybe you already did a DNA test, and you want to know more about how and why your Mexican roots might show up as Native American on a DNA test.

In this post, I’ll discuss this, plus a little bit about the genetic makeup of Mexico before the arrival of the Europeans, the connection between the indigenous peoples of Mexico and the United States, and whether or not all Mexicans have Native American DNA.

And as a bonus, if you haven’t already taken a DNA test, I’ll tell you how to do it – especially if you are looking for possible Native American ancestry in your own DNA.

Mexico before and after arrival of Europeans

Before the arrival of the Spanish conquistadors in Mexico, there were at least 25 million inhabitants living within the geographic boundaries of what we now know as the country of Mexico.

Many indigenous Mexicans lived in cities, as Mexico was home to cities as large as some of the largest Spanish cities.  Tenochtitlan, for an example, had an estimated population of 200,000-350,000.

Because of disease, war, and generally poor living conditions, more than 95% of the original inhabitants of Mexico died during the first hundred years of Spanish occupation and colonization.  The population went from over 25 million to about 1.2 million during this time period.

Despite the scale of this incredible tragedy, many indigenous languages and cultures survived are still alive and well today.  Even though many people (less enlightened than my readers) tend to think of Mexico as a generally Spanish/indigenous “mixed race” nation, more than 25 million Mexicans self-identified as indigenous in an official government survey in 2015.

Indigenous cultures, languages, and identities are alive and well in many parts of Mexico.

Unfortunately, many Mexicans have lost touch with their ancestors’ indigenous languages and cultures.  Within their genome, however, the connection persists.

Cool fact:  There are more than 68 languages, with hundreds of local dialects, spoken of them – most indigenous to Mexico.  89 of these languages are recognized as official languages of Mexico.

There are a few different theories about how humans arrived in North and South America.  The most commonly accepted, and the ones for which the most compelling evidence exists, involve early humans arriving – tens of thousands of years ago – from Asia.

There is evidence that they moved south, and then north, and then east.  These descendants of the original peoples formed distinct communities with their own unique language and culture.

The DNA evidence that backs up the idea that all indigenous peoples of North and South America have a common genetic origin is comprised of mtDNA, yDNA, and autosomal DNA.  mtDNA and yDNA mutate very, very slowly over time.

Autosomal DNA, which is the type of DNA that Ancestry DNA, Family Tree DNA, and My Heritage DNA use to determine your more recent (as opposed to very ancient) ancestry, has also been used to show genetic connections between the Native Americans of North and South America.

The terms used to describe people who are indigenous, or native, to North and South America vary.  In Canada, people sometimes use “First Nations”.  In the United States, the term “Native American” has (fortunately) replaced “Indian”.  In Mexico, “indigenous” (English translation) is commonly used.

I tend to agree with the idea that people across both continents are indeed all Native American, or First Nation.  The geopolitical and societal boundaries that were superimposed over the preexisting communities can’t change the fact that there is a profound connection between cultures, languages, and even the genomes of individuals across the continents.

Below is a DNA result for a person with deep roots in an indigenous central Mexican village:

The result is that I will use the term “Native American” to describe indigenous Mexicans for the purpose of the remainder of this article.

Do all Mexicans have Native American DNA?

You might be surprised to learn that not every Mexican has Native American DNA, though it’s fair to say that most Mexicans will show at least some trace of Native American ancestry, whether it be through mtDNA, yDNA, or autosomal DNA testing.

A few interesting facts about the “deep” lineage of Mexicans, going back on paternal and maternal lines over thousands of years using mtDNA and yDNA tests:

Autosomal DNA, which is the type of DNA that I talk most about on this site, shows more recent ancestry.  Generally, autosomal DNA will show your ancestry from the past 300-500 years, and occasionally will give you a glimpse as many as 1000 years back in time.

Mexico is a very diverse country, and the amount of Native American DNA that a particular native of Mexico is likely to have will depend greatly on the region in Mexico where they are from.

As you can see, the amount of Native American DNA that you might find in your own genome could vary widely depending on which part of Mexico your Mexican ancestors came from.

If you think that your family didn’t live in Mexico for many generations (immigrants to Mexico), then there is a chance that your ancestors didn’t “admix” to a great extent with people outside of their immigrant communities.

Mexico is a very diverse country and has been the recipient of immigrants from dozens of countries.  (Read more about “Mexican DNA“)

How to find out if you have Native American DNA

The best way to find out whether or not you have inherited any Native American DNA from your recent ancestors is to take an autosomal DNA test.  Autosomal DNA tests will provide you with an “ethnicity estimate”, which compares the DNA that you inherited from your mother and father to that of people from sample populations all over the world.

Along with Native American DNA, an autosomal DNA test will test for regions in Africa, Europe, and Asia.  You will also get DNA matches, which are a great way to find living DNA relatives!

If you are interested in learning about your “deep” ancestry – thousands and thousands of years ago, and want to know your mtDNA and your yDNA haplogroups that trace your pure maternal and paternal lines, you might be interested in the following tests with Family Tree DNA:

The yDNA test is for males only, since females don’t inherit a “Y” chromosome, so be sure to specify if you are male or female so they give you the correct test(s).  Don’t worry, if you are female, you can still test your deep lineage, but only on your maternal line.

If you are interested in learning more about this test, follow the link below (I will receive a small commission – thank you!!):

If you have any questions about something that you read here, or would like to share your own experience, I would encourage you to leave a comment below.

Thank you so much for stopping by today!

← Previous
What is a Third Cousin DNA Match? 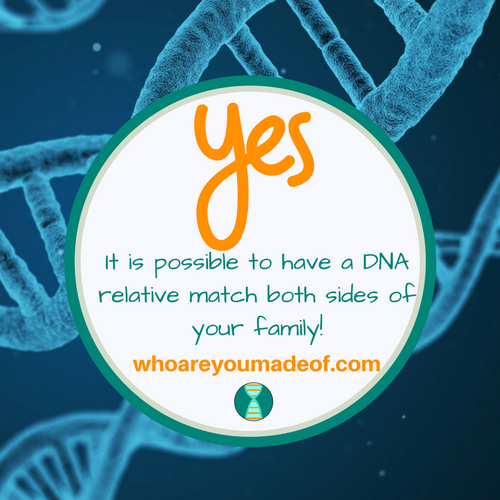 Next →
Is it Possible to Have a DNA Match Who Matches Both Sides of Your Family?
Click here to cancel reply.

Hello! I did the DNA test and it showed I have 52% Indigenous Americas-México, and my deceased mothers sister claims we have Cherokee blood in us but I didn’t see her name on the family tree, I know for sue on both sides of my parents their parents were from Mexico but I want to know if that 52% makes me a Native American, please help! Thank you!

Hi I did DNA & I got 45 % indigenous Americas - Mexico So I don’t understand what that is. I have family tree but the one person that claimed Navajo I can’t find anywhere my grandmother I would like to know what I am

Hello Mercedes, So, if my DNA says I’m 40% Native American, is that a significant amount to say that I am Native American. If not, what does this percentage mean? Thank you, Rebecca C.

Hi Rebecca, Thank you so much for your comment! It is clear that you have substantial indigenous American ancestry, which is so amazing. Your question about identity is an interesting one, since how we choose to identify is a very personal choice based on our culture, personal experiences and preferences. I would highly recommend researching your family tree to see what you can learn about the culture of your Native American ancestors, which might help you come to a conclusion. I hope this helps :)