Can a Child Have More Ethnicity Than a Parent?

Ethnicity estimates are the source of a lot of confusion and discussion in the genetic genealogy world.  One very common question that people have is whether a child can have more of an ethnicity than a parent does.

It is understandably confusing when this happens. In this post, I will help you understand a few reasons why this can happen, and what it really means.

This post will address a few different situations and give a few possible explanations for each:

Neither of my parents have tested, but I know their ancestry – why does my ethnicity estimate show this ethnicity?

The thought process is understandable.

While these scenarios are definitely possible (as they say, there is nothing new under the sun!), an ethnicity result can never, ever be “proof” of such an occurrence.

Since you haven’t tested, or can’t test, your parents’ DNA, you will have to have an open mind when looking at your results. There are many other reasons why your ethnicity estimate can be different than what you would expect.

It’s possible that your parents really do have extensive roots in a certain part of the world, but they had DNA from many distant ancestors from a nearby region.  For example, people in Germany can often have a lot of Eastern European DNA.

When you combine this with the fact that most companies don’t/can’t test for a “German” ethnicity, it can add to the difficult in making sense of your results.  German usually shows up as “Europe West” or “Western European”, though Germans can also have any number of other ethnicities from nearby regions – so this might be what is happening in your case.

It’s difficult for the DNA testing companies to “isolate” DNA from certain parts of the world.  If you have any ancestry that includes the indigenous citizens of North and South America, you might find a very vague “Native American” on your ethnicity,which might confuse folks with ancestors from Argentina, Brazil, or Mexico.

Ancestry DNA does offer more than two dozen more specific categories under the general Native American category, but it only really helps if you have very recent ancestors with indigenous American roots.

Your ethnicity estimate might reveal surprises about your parents’ ancestry

It’s possible that what you were told, or have learned about your family tree is incorrect.  Especially when you see an ethnicity that is completely unexpected – like from a different continent – than what you thought you would find, and especially when it is a relatively high percentage.

When this happens, it’s worth looking into more thoroughly.  For example, I know a young lady whose father is from Mexico and mother is American.  Her mother only has just a few percentage of Irish ethnicity, but the young lady has 12% Irish.

This very obviously means that her father had Irish DNA, even though most people believe (incorrectly) that someone from Mexico will only have Iberian and Native American DNA.

Of course, the best course of action is to have one or both of your parents do a DNA test, if you can.  If they aren’t interested, or aren’t available for testing, you can get a better idea of what their ethnicities might have been by having as many siblings do a test.

If you have an aunt or uncle on either side, or on both sides, that can also help you learn about your parents’ ancestry.  Siblings, even if they are 100% full siblings, won’t have identical DNA, and their ethnicity results might look very different – but their results are still helpful, since their ancestry is your ancestry, no matter what it shows.

If your parents did a DNA test with another company and you show more of an ethnicity than what they have on their results, there are three simple explanations that are the most likely.

If both of your parents tested with another company, I do have a few suggestions as to how you can get a more uniform ethnicity estimate for the three of you together:

(You can do these suggestions even if you don’t have any questions, as you can learn a lot from DNA matches at other sites!)

What if both of my parents tested at the same company and I still show an ethnicity that they don’t have, or higher percentage than they do?

The answer to this question is fairly simple.  When your testing company provides you with your ethnicity estimate, there is a range of percentages for each ethnicity that they say you have.

Some DNA testing companies provide you with the range, and others don’t – but you should still know that there likely is a range.  For example, take a peek at the range that Ancestry DNA provides:

The above image is from my own DNA results.  On my estimate, it says I have 9% Irish DNA, but if I click on it, it tells me that my range of Irish DNA is actually very wide.

I should stress again that even if your company doesn’t provide you with a range, there is a range.

The lesson here is that our ethnicity estimate is only an estimate based on a range.  If yours doesn’t match up with your parents on a specific ethnicity, it could just be the “range effect”, as I like to call it.

An additional comment that I have on this specific topic is that if you show a very small percentage, like 1-2% of a particular ethnicity, and neither of your parents have it, there are two things that could have happened:

If you have any questions, comments, or just want to share your own personal experience, please feel free to leave me a comment below. 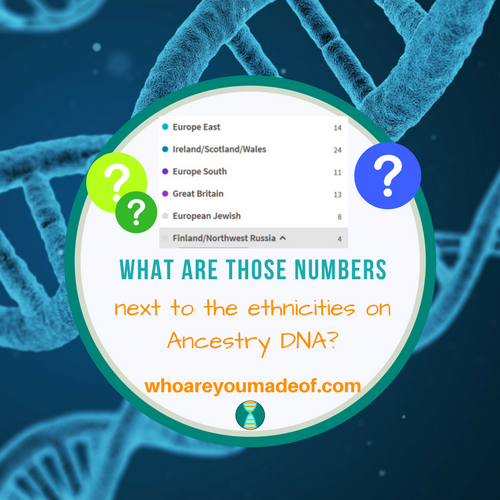 ← Previous
What are those numbers next to the ethnicities on Ancestry DNA? 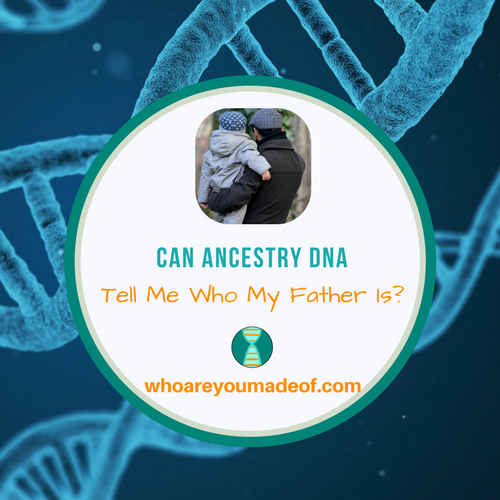 Next →
Can Ancestry DNA Tell Me Who My Father Is?
Click here to cancel reply.

My daughter and her mom got their DNA results back (I have not done mine yet). Her mom has 62% Germanic, 1% Scotland. My Daughter has 61% Germanic and 9% Scotland. Would I be wrong to assume that I would be at least half of my daughters Germanic percentage and the Scotland percentage is from me and my percentage will be higher upon taking test?