Are You Confused About Your Updated Ancestry DNA Results?

As you might know, Ancestry periodically updates their customers ethnicity estimates.  Every single Ancestry DNA customer can log in to their account and see a completely updated estimate based on the latest technology and scientific developments.

I often hear from my readers that these newly updated ethnicity estimates are confusing.  So, if you are confused by your updated results, this post is for you.

My goal is to help you decide how to approach your new estimate and see what insights it might give into your family history.

What do people think about their updated Ancestry DNA results?

Are you wondering what everyone else is saying about their new results?  While I can’t speak for everyone, here is a short list of some of the most frequent remarks and questions that I have heard, seen, or received via e-mail about the most recent update:

As you can see, everyone’s experience with their new, updated Ancestry DNA results is different.  The specific changes that you saw in your results and the way in which you view those changes will depend greatly on your own personal family history.

In other words, some people are thrilled with their new results while others are disappointed.  Most people probably found something interesting in their new results and are left with a little confusion about other facets of their updated ethnicity estimate.

Why did my Ancestry DNA ethnicity estimate change?

I’ve written a little bit about why ethnicity estimates change before, so I won’t rehash the entire conversation here – but I’ll go over the basics to make sure we are all on the same page.

The science behind developing an ethnicity estimate is very complicated and in its beginning stages.   Even as recent as ten years ago, the idea that someone could spit into a tube and then log into a website and look at approximations of where their ancestors lived hundreds of years ago seemed almost like something out of science fiction.

When Ancestry DNA feels confident that they have developed a process that will deliver more accurate results than the previous version of their results, they release an update.  Sometimes, the updates are minor.

Other times, like this year, the updates are fairly major.  Any time there is a big change, it tends to cause some amount of confusion.

There are two major points that I’d like to borrow from Ancestry DNA before we move further along into this discussion:

How do I know which Ancestry DNA ethnicity estimate (the old or the new) is the most accurate?

A few updates ago, the algorithm for determining the ethnicity estimates of Ancestry DNA customers used a much smaller sample database containing only 3,000 samples.  The larger database of samples used for the updated comparisons should always lead to higher accuracy.

The updated population samples have also made it possible to report – in many cases – more specific regions.  One notable region is the Iberian Peninsula, now retired, which is now reported as Spain or France.

Ancestry DNA has added more regions, and more sub-regions, due to the larger and more improved group of reference DNA samples used to determine ethnicity.

Even though in both the old and the new methods for estimating ethnicity, Ancestry DNA uses around 300,000 of these SNPs in their analysis of our DNA for the purpose of estimating ethnicity, there are important (and much more advanced) differences in the method uses to figure out what should be on our ethnicity estimate.

Even though the new method of analyzing the SNPs to much too complicated to explain here, in summary, they are able to look at our DNA in segments instead of individual SNPs.  It’s important to do this because we inherit our DNA in segments from our parents (and their DNA was inherited from their parents in segments, and so on, and so on), and so it does make sense to view adjacent positions in our DNA as segments instead of individual SNPs.

All of this is to say that while there still might be bugs to work out and improvements to be made, the new ethnicity estimates should be more accurate than the previous ones.

An entire region (Iberian Peninsula/Scandinavia) disappeared from my DNA results

Some people have had an entire region disappear from their results.  Some of the regions that have caused the most surprise among the people that I have talked to include Nigeria, Scandinavia, East Asia, and the Iberian Peninsula.

For those of us that had a whole region disappear to be replaced with no country from within that region (i.e. people like me who had their Iberian Peninsula disappear), there is a possibility that that region should not have been in our results in the first place.

For example, a family member had “Polynesia” on his previous results, along with East Asia.  These categories both disappeared on the update, and they were both replaced with the “Philippines” – matching his known ancestry perfectly.

In the case of my Iberian Peninsula DNA, is it still possible that that some of my DNA really did come from the Iberian Peninsula long ago, but now my DNA matches best people who now live in Great Britain and Northwestern Europe?

I know several people who had substantial amounts (more than 30%) Scandinavian DNA on the old estimates and their DNA changed to Great Britain and Northwestern Europe, too.

It is known that the Vikings had a substantial influence on certain regions of Northwestern Europe, and so was the Scandinavian on some people’s previous results a fingerprint Scandinavian voyagers and raiders left on the UK from many hundreds of years ago?

While many people initially did their Ancestry DNA test to have access to an ethnicity estimate and get some quick insight into where their family lived over the past few hundred years, there is a secret treasure in your DNA results.  This treasure, if you haven’t already discovered it, is your DNA match list.

If you take a careful look at your DNA match list, starting with your closest matches and working your way through all (or many) of your 4th cousins and closer, you will get a very good idea as to the accuracy of your ethnicity estimate.  You’ll also learn important details about how far back certain ethnicity regions from your estimate are in your family tree.

For example, if you show that you have 12% DNA from the France region, then you might wonder whether or not you have a French great-grandparent that you never knew about.

Alternatively, you might assume that the French DNA comes from many ancestors far back in your tree that all had some French ancestry (this would be very true for French Canadians, for example).  How do you know which situation applies to you?

If you have a great-grandparent who was born in France, or was born somewhere else to French parents, then that means that you probably have many 2nd-4th cousins who either live in France, or who have lots of recent French ancestors in their family tree.

By taking a look through the family trees of your DNA matches, you will be able to see if most of your closest matches have ancestors who appear to be French Canadian, or if they have recent ancestors in their tree born in France.

My grandmother had about 36% Scandinavian in her ethnicity results in the old update, and when I first saw it, I wondered if it meant that she had some hidden ancestor that was previously unknown to me.  By looking through her 4th cousins, I was able to determine that if the Scandinavian DNA was accurate, it was not recent.

My theory was verified in the new update – her Scandinavian disappeared completely and was replaced with Great Britain and Northwestern Europe, matching her known ancestry more closely.

I hope that this post gave you a few ideas about how to approach your updated ethnicity estimate.  I would love to hear your thoughts on your updated estimate, and whether or not you learned something interesting and new about your family’s history.

If you have any questions about something that you read in this post, I hope to hear from you in the discussion, as well.

← Previous
What is the Best DNA Test for Native American Ancestry? 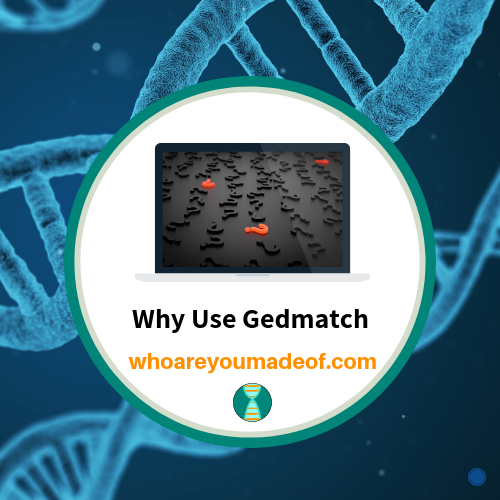 Next →
Why Use Gedmatch
Click here to cancel reply.