Who Was Mitochondrial Eve?

Do you want to know who Mitochondrial Eve was, and what she stands for? In this post, learn about her, whether she is your ancestor, and why the theory mt-Eve is important to us today.

The use of the name “Eve” in our “Mitochondrial Eve” is a sort of misnomer. In fact, it’s bit unfortunate that this name was chosen to refer to this important ancestor, as the name Eve is often associated with certain religious beliefs.

This association has caused misunderstandings about the meaning of Mitochondrial Eve, or mt-Eve, who she was and who she might be in the future. A more accurate name for her would be the “most recent mitochondrial ancestor of every human”.

That’s quite a mouthful, and so we can see why a shorter nickname caught on.

Names aside, Mitochondrial Eve has little to do with theological discussions. In fact, as you will learn below, who our Mitochondrial Eve is today is likely different than who she was many thousands of years ago, and who she will be in the future.

Who does mitochondrial Eve represent?

Mitochondrial Eve is a woman who lived many tens of thousands of years ago from whom all humans are descended through their direct-line maternal ancestors. Estimations of the exact time period when she may have been living range from 100,000-200,000 years ago, which was before human beings began migrating out of Africa.

She could be our shared 16,000th great-grandmother!

This woman, who lived in Sub-Saharan Africa, possibly near the Makgadikgadi–Okavango wetlands in Botswana, is sometimes called Mitochondrial Eve. Or for short, mt-Eve, with the “mt” standing for “mitochondrial”, as in mitochondrial DNA.

Mitochondrial DNA is contained with most of our cells, and a mother passes it down to all of her children, both male and female. Mitochondrial Eve’s mitochondrial DNA (mtDNA) has survived in an unbroken chain of maternal lines for as many as 200,000 years.

How incredible is that?

It is important to note that our so-called Mitochondrial Eve, or our Most-Recent-Common-Mitochondrial Ancestor is unlikely to be the only female ancestor that we have who was alive at the time. Many other women who lived at the same time that she did likely have living descendants.

Instead, she is the most recent direct-line maternal ancestor we all share. This is an important distinction.

Are all humans descended from mitochondrial Eve?

Put a different way, we should understand that mt-Eve is likely not the most recent common ancestor of most humans in a genealogical sense. We might all also be descended from a different male or female born more recently.

However, scientists do believe that we all inherited our mitochondrial DNA from her, our Mitochondrial Eve, who was born before humans began to leave Africa and populate the other continents of the earth.

mt-Eve could be a different person in the future

It is interesting to note that while we can think of a specific person as Mitochondrial Eve, mt-Eve, or our most recent common mitochondrial ancestor, today, but that who she might be thousands of generations from now could change. How could this be?

Some of the mtDNA lines that are being carried in our DNA today might not survive unbroken for thousands of generations. This means that someday, a different woman will be the Mitochondrial Eve to future humans – our descendants.

Was mitochondrial Eve the first woman?

Mitochondrial Eve was not the first human female to have lived. She likely had thousands of generations of ancestors before her, since scientists believe that humans have been living on earth for at least about 300,000 years.

Females that lived before our Mitochondrial Eve may have descendants living today, but their mtDNA did not survive unbroken. For example, if some of those women only had male children, then the grandchildren would carry the mitochondrial DNA of their mothers (and not their grandmother).

Why is the theory of mitochondrial Eve important?

Mitochondrial DNA is interesting to genetic genealogist such as ourselves because we can use mtDNA in our genealogy research. Because mtDNA is passed down from a mother to her daughters and sons, we can use this information to verify that two people are possibly descended from the same direct-line maternal ancestor.

Mitochondrial DNA does mutate slowly over the generations, and sensitive genetic tests can detect these subtle changes. These changes, both big changes that happen over the course of tens of thousands of years and smaller ones that occur more frequently, are called haplogroups and subclades.

Mitochondrial Eve’s haplogroup is called L0. Scientists have learned about the way mitochondrial DNA is inherited, and have had the opportunity to study mtDNA in ancient remains, and they have used this information to develop a “tree” of mitochondrial haplogroups, sometimes called a haplotree, to track the mitochondrial lineage of modern humans.

We can compare our haplogroup and subclades that match our mtDNA to estimate how closely related we might be to other people who have the same haplogroup. Learning about what mtDNA can tell you about your family tree can be a fun, interesting, and useful addition to the genealogist’s toolbox.

I hope that you have found this article interesting, and that you have learned everything that you wanted to know about Mitochondrial Eve, including why it might be better if she had a different name.

If you have any questions about Mitochondrial Eve, mtDNA, or anything else that you read in this post, I would love to hear from you in the discussion below. 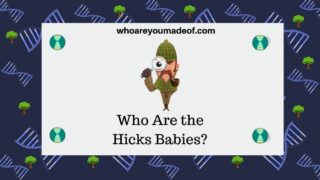 ← Previous
Who Are the Hicks Babies? 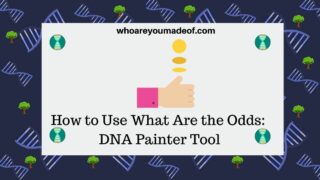 Next →
How to Use What Are the Odds: DNA Painter Tool
Click here to cancel reply.

What happened 200,000 years ago to interrupt the transmission of mtdna? Surely also there cannot have been a day when mtdna existed and not the day before. As with all features of our present day bodies,mtdna must have evolved slowly over the centuries to become what we believe to be a stable form of mtdna we recognise today?