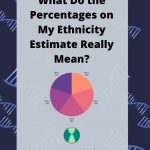 If you have just gotten your DNA results back, you might have noticed that your ethnicity estimate is reported in percentages.  Are you wondering what all of these what do ethnicity percentages mean?

Does having a lot of one particular DNA region mean that you have recent ancestry from there?  Does a low percentage mean a distant ancestor?

I’ll answer these questions in this post. We’ll learn how to understand more about the DNA ancestry percentage breakdown.

By the time you are done reading this article, you will understand what the percentages mean on Ancestry DNA, 23andMe, My Heritage DNA, and Family Tree DNA. Basically, no matter which company you did your test with, you will find help here.

What do ethnicity percentages mean?

The DNA ancestry percentage breakdown that you see on your ethnicity estimate corresponds with the amount of your DNA that matches the particular regions listed.

Reference panels are made from thousands, or even many tens of thousands, of DNA samples collected from people with long, verified history in a region.

Have you wondered if a really high percentage from a DNA or ethnicity region means that you must have had a recent ancestor who was born there? While having a high percentage that matches a DNA region can signify that a parent or grandparent was from that area of the world, it doesn’t always.

This is one of the most common misconceptions about ethnicity estimates.  If someone has a high percentage (like more than 50%) from a particular region, they might assume that that means that their “100% ancestor” must be one of their parents.

This can often cause people to get very concerned about their family tree – have they discovered a secret? Most of the time, there is a simple enough explanation and it doesn’t mean that we have uncovered anything necessarily surprising about our ancestry.

In this section, you will learn how to tell whether the high percentages you find on your results are from recent or more distant ancestors.

(Plus, ethnicity estimates can never be used to determine paternity)

High percentage of an ethnicity region can mean recent ancestry

Sometimes, having a high ethnicity percentage does mean that the parent was from, or had extensive ancestry in, the region in question.  I think of one of my family members who has a parent from the Philippines.

He took a DNA test and showed 50% Filipino DNA.

Since we know that his parent was from there, it makes perfect sense. In fact, a recent (2020) Ancestry DNA update has narrowed his ancestry down more specifically to the La Union, Pangasinan region in the Philippines.

How do you know if your ancestry from the region is very recent, like only one generation?  If half of your ancestry is from a DNA region where you don’t live, then you will be able to easily spot this on your DNA match list.

You will notice that you have many cousins (from 1st-4th) who were either born in a country within the DNA region, or have many, many ancestors from there in their family trees.

For example, if you have 50% of your DNA matching the Germanic Europe region and you suspect that one of your parents has all or most of their ancestors born there, you would find strong evidence of this in the family trees of your DNA matches.

You may find first, second, and third cousins who were either born in a country within the Germanic Europe DNA region, or whose parents or grandparents were born there.

Depending on where your recent ancestry is from, you might have trouble finding enough DNA matches on some of the most common DNA testing sites.  While DNA testing is growing in popularity, it isn’t as equally popular or accessible in every country of the world.

If you find that you don’t have very many first, second, or third cousin DNA matches, you might want to learn about places to upload your DNA so you can get more DNA matches to get a better understanding of your recent ancestry.

Other times, having a very high percentage of a particular ethnicity means that many, or even all, of your ancestors have roots in a particular place.  For example, my husband has 100% Native American on Ancestry DNA.

He was born in a Mexican village that has well-known and well-researched indigenous Native American roots.  He is 100% Native American because all of his ancestors were.

This is a kind of obvious example, since he was born there, and of course both of his parents must have been 100% Native American, as well.

This same DNA inheritance pattern can occur in people whose families haven’t lived in the DNA region for centuries.  For example, my grandmother has 95% England, Wales, and Northwestern Europe on her DNA results.

While this obviously means that both of her parents had about half of their DNA from this region, it doesn’t mean that one of her parents was from England (or any other country within the DNA region).

My grandmother’s most recent ancestors who were actually born within the DNA region in question are three out of 32 great-great grandparents.  This isn’t enough to explain the 95% England, Wales, and Northwestern Europe DNA that she inherited.

All of her other ancestors, going back a few hundred years, were born in North America.  Instead, the most obvious explanation is that a vast majority of all of her ancestors on both sides of her family also had a majority of their DNA from this same region.

Basically, she inherited this DNA from many, many ancestors on all recent lines of her family. This is the most common explanation for a high percentage matching a region with no known recent ancestry from there.

If you think about it, it’s really not surprising that people with a common background married and procreated – especially historically.  Marriage in the same community was a great way to ensure social support, which a long time ago also meant survival and prosperity.

Does a small percentage of DNA from a region on ethnicity estimate mean distant ancestry?

A small percentage of a region on your ethnicity estimate can, and usually does, mean that some of your distant ancestors were likely from that region. There is no precise way to determine exactly how far back you will need to look in your family tree to identify those ancestors, however.

This very simple sentence is key to understanding your ethnicity estimate.  Basically, some of the parent’s DNA is left behind each generation, and we don’t know which DNA got passed down and which DNA got inherited (unless, of course, everyone has taken a DNA test).

What is the ethnicity estimate “rule of thumb” to understand percentages?

There is a general rule of thumb that we can use to help us understand how far back in our family tree we might have to look in order to identify our “100% ancestor”.

This rule only works when we assume that we didn’t inherit the DNA region in question from multiple ancestors. In the example I mentioned about my grandmother, we know that this rule wouldn’t apply because she likely inherited DNA from the England and Northwestern Europe region from multiple distant ancestors on both sides of her family.

If someone only has 2% DNA from the Norway DNA region on Ancestry, some people might assume that the DNA trajectory looked something like this:

The above scenario could definitely be the way that our DNA tester’s Norwegian DNA was passed down.  It’s a good rule of thumb, especially when we don’t have any more information to work with and we are trying to estimate how far back our ancestor from a particular region came into our family line.

It’s also important to understand that there are many other scenarios that could apply to our DNA tester’s 2% Norway DNA.

For example, they could have inherited 1% from both of their parents, making our estimated distance to the Norwegian ancestor twice as far back as we originally estimated.

Alternatively, the DNA tester’s parent might have inherited the 2% Norway DNA completely intact from their parent (the tester’s grandparent), meaning the parent only had 2% Norway DNA, too.

A few more options for our 2% Norway DNA would be that the DNA tester’s parent had 15% Norway DNA and 85% Eastern Europe and Russia DNA, and when the randomly selected 50% of their DNA got passed down to their child, the child just happened to get more of the Eastern European and Russian DNA.

Occasionally, an ethnicity region is wrong

It’s important to mention that while DNA ethnicity estimates are very accurate, especially with Ancestry DNA, 23andMe, My Heritage and Family Tree DNA, it’s possible that a particular region has been reported in error.

When this happens, it’s not the fault of the DNA testing company.  DNA is pretty tricky, and sometimes DNA from one region looks so similar to DNA from another region that it’s hard for the testing company’s algorithm to tell is apart.

This is most likely to happen between two adjacent regions, just because DNA from neighboring regions will tend to have more similarities than two regions that are very far apart geographically.

How to use the information on your ethnicity estimate

The best way to know what your ethnicity estimate is really trying to tell you is to build your family tree. Building a family tree, using our DNA results as a guide, is an excellent way to learn as much as we can about where our family came from.

If you don’t yet have a family tree, I highly recommend building one. You can get my book on Amazon to learn how, which is also available as an immediate PDF download.

I build family trees on Ancestry. It’s free to get started, and it’s always free to access your tree.

A subscription is recommended, however, because it makes it so much easier to examine records and documents pertaining to our ancestors.

I was shocked to see that I had a 47% Scandinavian DNA. I do seem to remember that my ancestors had left Germany because of conflict with the king and having title taken away, and went to Sweden, then to France.

Hi I’ve just has my results back and always thought I’d be pretty much 90 percen south Asian with a bit of Persian roots. My estimate shows as: 74.2 per cent south Asian and; 11.4 percent Scottish, Irish and welsh 14.4 3 other ethnicities (western Asian, central Asian and Jewish) I’m surprised at the Celtic line, does this mean I have a recent ancestor from these parts? or can I really believe this is true? I’ve asked my heritage if this could be a mistake but they insist these tests are fairly accurate. No one in the family is aware of any European links within the family. I’m excited if true !

Hi, I had one done on my heritage and it showed 84% English (but said this included parts of Ireland too?!) 8% greek/South Italian and 7% Irish. I'm curious about the 8% greek being higher than 7% Irish as my great grandparents were both southern Irish on my mums side and intrigued by the 8% greek statistic and what this means? Thanks

Hi Leonie! Do you have known Greek or Italian ancestry? The most likely explanation for not showing more DNA matching the Ireland region is that your Irish great-grandparents likely had some DNA matching the English region, which would really make sense - those regions are very close together and share a long political and cultural history. Sincerely, Mercedes

A question. I had my great grandsons dna tested. It gave me different regions. But the one I am interested in was the 17 % Central American. His father is American Mexican. So why did it not show more of Mexican in his dna.