What are Archaic DNA Matches on Gedmatch?

What are archaic DNA matches on Gedmatch? What does it mean to have ancient DNA matches? Can they be used for genealogy? In this post, learn the answers to these questions, as well as tips for using the tool.

What are archaic DNA matches on Gedmatch?

Researchers have made dozens of archaic or ancient DNA samples available on Gedmatch for comparison with other users of the site. You can use the Archaic DNA Matches tool to see which archaic samples match your DNA.

The ancient samples range in age from about 1,000-50,000 years old, and are from archeological sites in North America and Europe.

How to use the archaic DNA match tool on Gedmatch

Its really fun and interesting to see which archaic DNA matches show up as matches, so I sat down with my husband to show him who his archaic matches. Below, I will walk you through the steps you should take to pull own your own archaic DNA match list.

Directly from your Gedmatch dashboard, which is the screen you see when you log in to the site, you will see a list of DNA applications to the right of the screen. The Archaic DNA Matches tool is at the bottom of the list, as shown in the image below:

The next screen is the Archaic DNA Matches tool page, where you will need to enter the Gedmatch kit number of the person for whom you would like to display a list of archaic DNA matches. You can enter your kit number, or the kit number someone else has provided for you.

In the image below, you can see exactly where to enter your kit number. You will also notice that you can adjust the Upper Segment Threshold Limit”, which I will discuss in more detail towards the end of this post.

For the purposes of this post, I will leave the upper segment threshold limit at the default segment size, which is .5 cM. Since I’m using my husband’s Gedmatch kit as an example for this post, the Gedmatch Archaic DNA match tool will show me DNA segments that are larger than .5 cM and match with the archaic samples on the site.

It should be noted that .5 cM segments are very small, and majority of matching segments so small are likely to be “coincidentally” identical (also known as identical by state). Even so, the default level is an interesting place to start.

The image below shows part of my husband’s archaic DNA match results. The orange bars represent DNA segments that match at .5 cM or higher.

My husband is almost 100% Native American from Mexico, and so I am most intrigued by his match with the Clovis, Montana sample, which I highlighted in red in his results above.

If I adjust the upper segment threshold limit, I can see if he shares larger segments with the Clovis sample. I’m going to go much bigger this time, and choose to display segments that are larger than 5 cM.

Does having an ancient DNA match mean that they are your ancestor?

If you share a relatively large DNA segment with one of the archaic DNA samples on Gedmatch, you might wonder if this person is your ancestor.

While it is certainly possible that some of these individuals could be your direct ancestor, it is probably more likely that you and your archaic DNA match descended from (and inherited DNA from) the same common ancestor. In other words, they can be very (extremely!) distant cousins of yours.

For example, people who share DNA with the Clovis infant found in Montana cannot be directly descended from him. He was only about a year old when he perished, and did not survive to adulthood to produce offspring. Therefore, he cannot be a direct ancestor to anyone.

Instead, the Clovis child and his modern DNA matches share ancestors in common.

Can you use ancient DNA matches for genealogy?

Our ancient DNA matches won’t help us with genealogy in any tangible ways. However, since geneticists say that we will share more “coincidentally” identical segments with people from the same part of the world where our ancestors lived, there can be some indirect value in using the archaic DNA matches tool on Gedmatch.

The utility of the tool is similar to that of ethnicity estimates. An ethnicity estimate can’t directly help you build your family tree, but it can provide general guidance as to where your ancestors may have lived.

In this way, ancient DNA matches are similarly useful.

Take, for example, the images that I showed you in the first part of this post. Almost all of my husband’s many thousands of of ancestors were Native American, and he shares

Plus, it’s just all so interesting! If you have ancestors from the same parts of the world where some of these DNA samples were from, you likely share common ancestors.

I hope that this post has helped you understand the archaic DNA match tool on Gedmatch Genesis, how to use the tool, and whether you can use these DNA matches for genealogical purposes.

If you have any questions about something that you read in this post, or if you would like to share your own archaic DNA matches here, I would love to hear from you in the discussion below.

← Previous
How to Find DNA Matches on Gedmatch 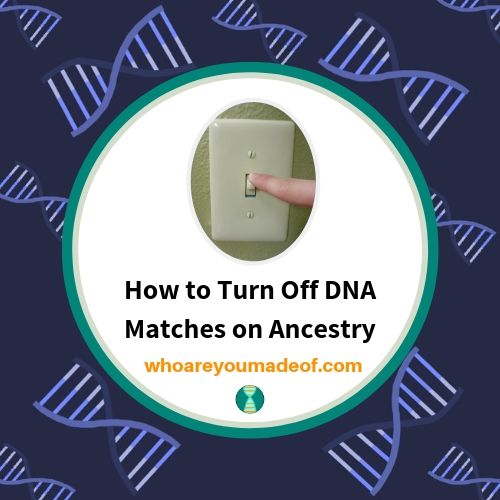 Next →
How to Turn Off DNA Matches on Ancestry
Click here to cancel reply.

Wow I have come across this today and it's blowing my mind! Especially sharing DNA with Romans that were dug up at Driffield Terrace in York. Hopefully I have understood it and that is what it says hah!

Hi Donna, I agree - it's amazing that we are able to make these comparisons. I'm glad you are finding the tool interesting! Sincerely, Mercedes

hello im still trying to understand all of this dna stuff aka Pandora's box for me LOL i just did this chart for myself and i have the same amount for Clovis ...My moms side is native american and since DNA test i have no idea about my bio father so maybe he was native american too? ugh anyways this was interesting thank you for this post.

I'm not sure if that archaic tool's still working as all of my matches have the S A M E ''archaic ancestor'' than I. I also have the clovis one, the same amount of the ''orange bar'' and all of my family is pure Native Brazilians, Afro-Brazilians and Brazilian-Portuguese. I think that tool just doesn't work.