Are you wondering whether it is possible to use your DNA to prove that you are descended from someone?  You have come to the right place.

In my previous post in this series, I mentioned that having your older relatives do a DNA test can be very helpful in learning more about your ancestry.  In this post, I will discuss the DNA results of my grandmother, who is a 9th great-granddaughter of John Alden, a Mayflower passenger.

This is the second part of an “at least” two post series chronicling my quest to prove or disprove my ancestry.  You can read the first post here.

Our elderly relatives have DNA that we don’t

When my grandmother’s test results came back, I was very excited.  Her DNA revealed a lot of information about our family’s heritage that I would not have discovered using only my DNA.

For this series of articles, you might remember that I initially set out to prove, or even disprove, that I am truly a descendant of John Alden, and I knew that my grandmother’s DNA would be a key tool for my mission.

My grandmother and I share 1855 cMs, according to Ancestry (read how to find shared centimorgans on Ancestry).  This means that 27% of my DNA is identical to that of my grandmother, since this is the amount that I inherited from her.

Even though this is a little higher than the “average” 25% of DNA that a grandchild will share with a grandparent, it still means that 73% of my grandmother’s DNA did not get passed down to me.  Contained within this 73% is incredibly valuable information, like DNA segments that will match distant cousins and ethnicities that were “washed out” in the generation between myself and my grandmother.

Just a few basic differences between my DNA results and my grandmother’s DNA results:

There are two reasons why my grandmother has so many more DNA matches than I do.  First, half of my recent ancestors were from Eastern Europe, which means that many of my 2nd-distant cousins still live there, and have not done a DNA test with Ancestry to show up as a match to me.

The second reason, which is perhaps more interesting, is that my grandmother has many, many DNA segments that I don’t, and these segments that she has show a genetic link to people that don’t match me.  I’m related to all of her DNA matches in a genealogical manner, which is why I’m very happy to have her DNA to help me with my research.

Your DNA can link you to Colonial America

Concerning the number of DNA matches that my grandmother has, the sheer number of her matches gives me a tiny clue to the mystery that I am trying to solve.  According to our family’s extensive genealogical research, most of my grandmother’s ancestors lived in North America before and during the formation of the United States.

This means that all of her thousands or even millions of distant cousins all live in the United States, and the odds are good that a lot of these people are interested in genealogy, and maybe even DNA testing.

When I saw the number of DNA matches that my grandmother has (more than 49,000 in total!!), I realized that she probably did have links to Colonial times, just as we had been told growing up.

Additionally, Ancestry DNA has this other neat feature that is connected with the ethnicity results feature.  If you have ancestors that migrated from Europe to the United States, it’s possible that you might have a genetic link to one of their “Migrations”.

My grandmother has links to European immigrants (“settlers”, as they are commonly called) going back as far as the early 1700s:

You can use these same features to research links in your own family.

Your DNA can link you to famous ancestors

In my previous post, I mentioned Shared Ancestor Hints and suggested that they can be used to determine whether or not you are truly descended from a particular person.  This is basically true, with some caveats, which I will discuss in further detail below.

For now, I want to explain more detail about the Shared Ancestor Hints that I found that link my grandmother to John Alden.

To prove descendancy, work back generation by generation

When using DNA to prove that you are truly descended from a particular ancestor, you should use all available data and work back generation by generation.  My first step was to find evidence that my grandmother is indeed the child of both of her parents.

In the case of my grandmother, this was easy.  She and a younger brother have been blessed with longevity, good health, and an interest in genealogy.  They both did DNA tests and showed up as full sibling matches, sharing more than 2600 cMs.

This meant that I had verified that my grandmother’s paternal grandmother’s father and mother were indeed correctly named in my tree.

For those who would like to be reminded of the lineage that I am tracing:

The first cousin once-removed that was a match to my grandmother shares William Manchester as their MRCA (most recent common ancestor).  He was born in 1857, and it is kind of incredible that I can be 100% sure that he is my great-great-great grandfather.  But hey, as they say, DNA doesn’t lie.

My grandmother has a pretty extensive family tree on Ancestry, and we were able to attach her family tree to her DNA results in order to get additional Ancestry features to work for us.   She has 194 Shared Ancestor Hints with her DNA matches, which means that 194 of her DNA matches have built a family tree back far enough to show a possible shared ancestor with my grandmother.

Below, you can see the results of my work.

As you can see from the image above, my grandmother has four Shared Ancestor Hints with the granddaughter of John Alden as the MRCA.

I could have gone a little further with this and included Shared Ancestor Hints from my grandmother’s brother.  Also, since they both have thousands of 4th cousin matches, and if I had the time, I am sure that I could go through them and build my case even more using cousins that don’t have Shared Ancestor Hints.

Since a Shared Ancestor Hint depends on information that was created by other Ancestry users (who also happen to be your DNA matches), there is a chance that a phenomenon called “confirmation bias” can occur.

If you want to be descended from a particular person, then you would be very likely to only pay attention to the Shared Ancestor Hints that confirm what you already believe to be true, and ignore the DNA matches that could provide evidence that your family tree actually grew a different direction than you thought.

Additionally, especially when you are investigating someone “famous”, like John Alden, there is something else to look out for.  Many people really want to be descended from a particular person, especially if they grew up believing a family story which described a particular event.

This could lead these people to make incorrect assumptions while building their family trees.  It’s always possible that a Shared Ancestor Hint is analyzing incorrect information, and that while you really are related to your DNA match, and you really might be descended from the ancestor in question, you just might not have that shared ancestor in common.

Shared Ancestor Hints are best used in combination with other genealogy research and genetic genealogy tools.

If we are being honest, it’s just genealogy!  Considering that I have over 8,000 11th great-grandparents, it would just really be okay with me if there was one wrong person in my tree.

But since series is not about that, and it is about whether or not it is possible to really know for sure that you are descended from someone, there are more advanced techniques that can help you almost really, really prove it.

I hope that this post has helped you get a basic understanding of how DNA testing might be able to help you prove that you are descended from a particular ancestor.  If you would like to share your own experience, or have questions or concerns, I would love to hear from you in the comment section below. 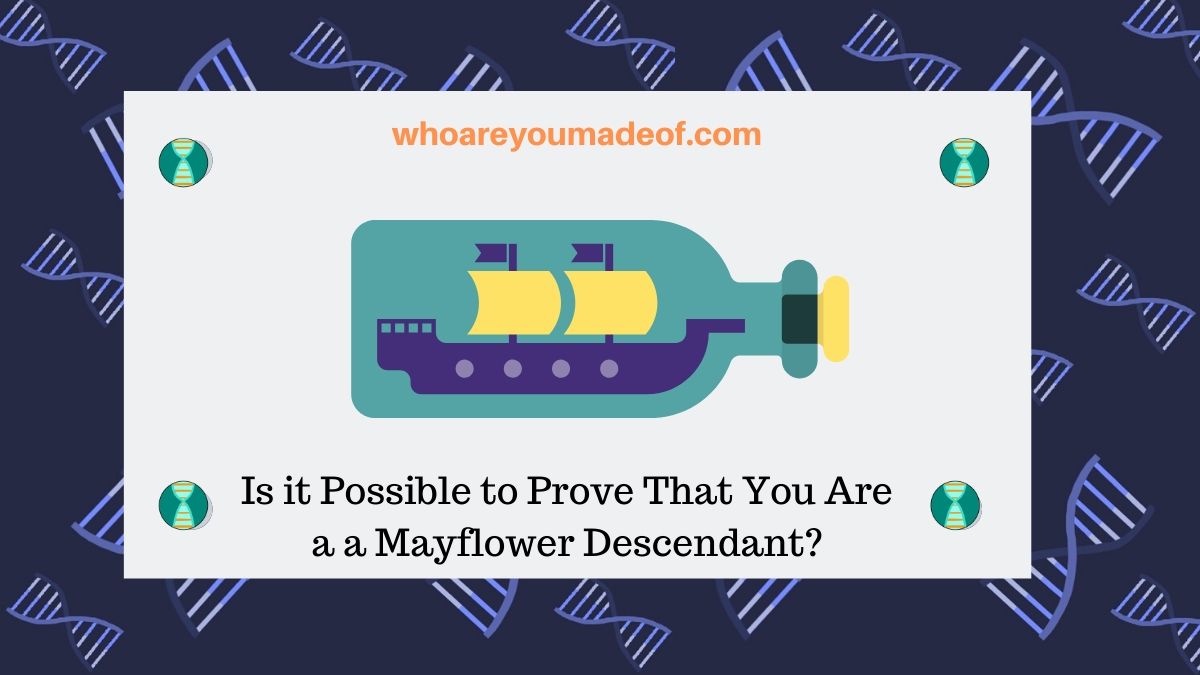 ← Previous
Is it Possible to Prove That You Are a a Mayflower Descendant?

Next →
Should You Keep or Expose a Family Secret Discovered Through DNA?
Click here to cancel reply.