Do You Have Spanish DNA?

Are you wondering how Spanish DNA would show up on a DNA test? Is there any way that a simple DNA test could detect Spanish ancestry?

Yes! Spanish ancestry can show up on a DNA test.

In this post, you’ll learn what Spanish DNA looks like on a DNA test, how to know whether you have Spanish DNA, and a little bit about tracing your family tree to find your Spanish ancestors.

How does Spanish DNA show up on a DNA test?

If you have inherited a detectable amount of Spanish DNA from your ancestors, there is a good chance that it will show up on your DNA test.  I generally recommend Ancestry DNA for DNA testing, but Family Tree DNA and My Heritage will also test for Spanish DNA.

Your Spanish DNA will show up in the category of Spain or the Iberian Peninsula on most DNA tests.   Below you can see what Iberian looks like on Ancestry DNA, Family Tree DNA, and My Heritage DNA.

On Ancestry DNA, Spanish DNA shows up as “Spain”:

On Family Tree DNA, Spanish DNA shows up under the “Iberia” category:

On My Heritage DNA, Spanish DNA will be under the South Europe category within the “Iberian” sub-region:

While Spanish DNA often does show up under the Iberian category on DNA tests, this does not mean that everyone who has Iberian DNA also has Spanish ancestry.

Two countries, Spain and Portugal, are entirely located on the Iberian Peninsula, and a portion of France is also located there.

How can I find out whether I have Spanish DNA?

The easiest way to find out if you have inherited Spanish DNA from your ancestors would be to take an autosomal DNA test.  This type of DNA test is offered by several different companies, but I recommend using Ancestry DNA.

I recommend testing with 23andMe or Ancestry DNA. They both test for the most sub-regions. Any of the following tests will pick up on your Iberian/Spanish ancestry, especially if it is recent.

What if I have Spanish ancestors, but none showed up in my DNA?

If you already took a DNA test and were expecting to see Spanish DNA (which would show up as Iberian), and don’t see any, there are two main reasons that this might have occurred.  First, there is a chance that your Spanish ancestors weren’t 100% Iberian – this is actually very likely, in fact.

The second reason is that your Spanish ancestors were so far back that you either inherited very little of their DNA, or none at all.

What do I mean when I say that your Spanish ancestors might not have been, and probably weren’t, 100% Iberian?  Just because you are born somewhere doesn’t mean that all of your ancestors going back many, many centuries were all from that same place.

Our ancestors traveled just about as much as we do now, just with less ease and comfort, and this means that our ancestors tended to share their DNA with nearby regions.  There is a good chance that your Spanish ancestors had DNA from other parts of Southern Europe, Great Britain, Ireland, and North Africa, among other places.

Because of the way that DNA is inherited, if your Spanish ancestor was many generations back in your family tree, there is a good chance that you didn’t inherit very much DNA from them, or any at all.

How to trace your Spanish ancestry

The best way to do this would be to start building your family tree – no matter how far back you think your Spanish ancestors might be.  The following are the basic steps to build your family tree:

For more information on researching Spanish ancestry, check out this Family Search page about Spanish Genealogy.

I hope that this post has helped you understand a little bit more about how Spanish might show up on a DNA test, how to find out if you have Spanish DNA, and how to trace your Spanish ancestors.

If you have any questions about something that you read in this post, please feel free to leave a comment below  – I hope to hear from you.

← Previous
What is a Second Cousin DNA Match? 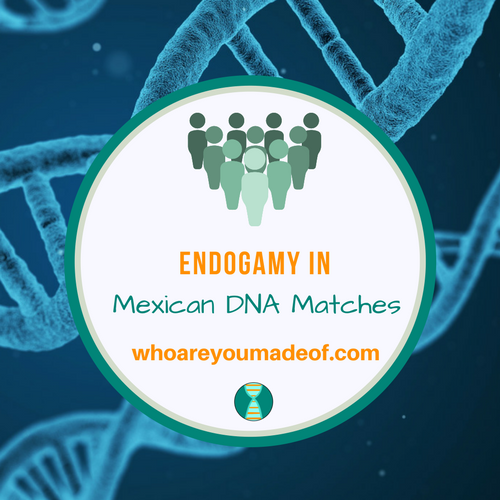