Which Grandparent Are You Most Related To?

My oldest son looks and behaves in a very similar fashion to my father. He even tells silly jokes just like my dad does and has his metabolism, which means that he can eat anything that he wants.

Does this mean that my son shares more DNA with my father, his maternal grandfather? Which grandparent is he most related to?

We’ll explore this question below.

How much DNA do you share with your grandparents?

The human genome is organized into four main categories of DNA, and some of that DNA is shared with each of your four grandparents. Exactly how much DNA you share with any given grandparent will depend on chance, as well as whether you are biologically male or female.

The four main categories of DNA in the human genome are:

Below, I’ll discuss these four categories and help you determine which of these types of DNA you likely share with each grandparent, as well as about how much.

How much autosomal DNA do you share with your grandparent?

You will share between 18-33% of your autosomal DNA with any given grandparent, with the average amount of DNA shared being about 25%. Autosomal DNA is located on our numbered chromosomes, and makes up no more than 99.1% of a human’s genome.

In other words, most of the DNA that a person shares with their grandparents is autosomal DNA. You will share slightly more with some of your grandparents than others, but it will always fall within the approximate range that I mentioned in the previous paragraph.

We usually describe measurements of shared autosomal DNA using the term “centimorgans” (cMs), which is just a unit of measurement. In centimorgans, we expect someone to share between about 1300-2300 cMs of DNA.

It is possible to share a little more or a little less than the average amount seen. The above numbers are a general range.

How much X-DNA do you share with your grandparents?

Another category of DNA that may have been passed down to you from one of your grandparents is X-DNA. This is DNA found on the sex chromosome, and likely makes up less than 1% of our total genome.

Males have one X chromosome and females have two. These chromosomes are passed down in special patterns, however.

Males inherit a recombined copy of their mother’s two X-chromosomes. The mother has two copies of the X-chromosome, and these copies mix together to make a brand-new, unique copy containing bits and pieces from each X-chromosome, to pass down to her son.

Now that we know how children get X-DNA from their parents, we can understand whether someone might share X-DNA with their grandparents. There are a few conclusions that we can come to:

How much Y-DNA do you share with your grandparent?

The third category of DNA that you might have inherited from a grandparent is Y-DNA. Only males have Y-DNA, however, and this DNA likely makes up no more than 1-2% of our total DNA.

Y-DNA, like X-DNA, also has a special inheritance pattern.

Since only males have Y-DNA, males only pass this chromosome to their male children. In addition, the Y-chromosome is passed down intact from father to son, generation after generation.

Because only males have Y-DNA and males only inherit Y-DNA from their father, we know the following:

How much mtDNA do you share with your grandparent?

Mitochondrial DNA (mtDNA) is contained within almost every cell of our body. This DNA is inherited by both males and females from their mother, and makes up a very small fraction of all DNA in our genome.

Do you share the same amount of DNA with all grandparents?

The exact amount and category of DNA that you will have inherited from each of your four grandparents will depend on whether you are biologically male or female. In the section above, you learned about these four categories of DNA and how your grandparents may have passed them down to you.

The chart below will help you understand which category of DNA you might share with your four biological grandparents, as well as the approximate amount. The amounts are approximate.

We can see that both males and females will share three out of the four available categories of DNA with their maternal grandmothers, but this doesn’t necessarily mean that a bigger percentage of our total genome is shared with or mother’s mother.

There are many variables that can affect the actual amount of DNA that a given person shares with their grandparents. As I already mentioned, the range of autosomal DNA can vary greatly.

This could allow the female to share more overall DNA with her paternal grandmother than others. Even though females do usually inherit X-DNA from both of their maternal grandparents, it is usually made up of segments of X-DNA passed down from both of them.

The best way to get an approximate idea as to which grandparent shares the most DNA with you is to take an autosomal DNA test. If all four of your grandparents are available for testing, this is a great way to answer your question.

My favorite DNA test is the one offered by Ancestry. You can get your test using the following link:

If you are interested in learning more about DNA testing other than autosomal tests, which can help you learn about your Y-DNA and mtDNA, you can read the following post:

I hope that this post has helped you understand which grandparent you are most likely to share more DNA with, and how to find out for sure. 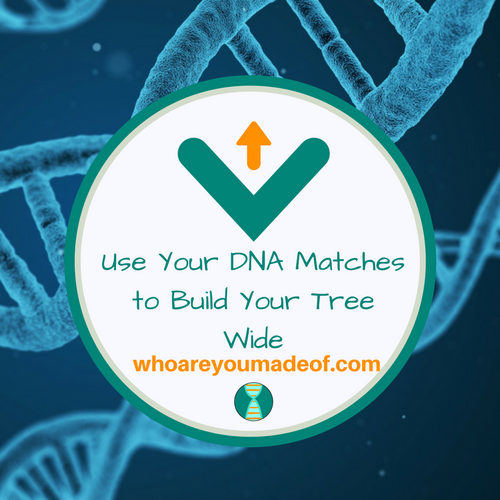 Next →
Use Your DNA Matches to Build Your Tree Wide
Click here to cancel reply.

This is so fascinating! I had both of my kids tested at ancestry. Their paternal grandparents also tested.

Does ancestry count the X or Y DNA in their calculations? Would my daughter actually share 1% more with her paternal grandmother than it shows?

I also tested their Great Grandmother (paternal grandmother's mother). My daughter shares 12% with her and my son shares 13%.

Since my daughter shares 21% with her paternal grandmother and 12% with great grandmother, does this mean she shares 9% with her great grandfather? (He is dead so I can't test him.)