Modern humans have been living in the Iberian Peninsula for many thousands of years.  Before modern humans, the peninsula was inhabited for hundreds of thousands of years by other species of hominids.  This all leads to a rich history that can get kind of complicated to understand completely.  In this post, we’ll discuss the Iberian Peninsula people from a DNA perspective.

My goal in sharing this information on this post is to help give you some ideas and historical context as to why you have Iberian Peninsula DNA showing up in your results.  There is no one-size fits all answer that explains it for every test taker.  You will have to look at your family tree, read about some history, and figure out what makes the most sense based on what you’ve learned.  Sadly, many times none of us will know for sure.

Maybe someday we will have access to better technology that can reach further back in history and can tell us more conclusively about our ancestry.  For example, take “junk DNA“.  Scientists don’t know all the reasons why we have it, and it contains the DNA from our ancestors and their parasites (what?!) going back for millions of years.  Scientists have learned a lot about this “junk DNA” (and it turns out to not be junk!) over the past few decades, and it is in part how they are able to provide us with ethnicity estimates.  The nerd in me longs to know more.  Alas, for now we must just try to learn as much as we can with the technology that we do have.

Remember that the DNA ethnicity estimates compare your DNA with people who live in the Iberian Peninsula today.  That’s why it’s important to understand history behind how their DNA might have come to look like it does, and what that means for you.

How did I get Iberian Peninsula DNA in my results?

The period in history that is the most relevant to those interested in understanding their DNA ethnicity results is the period of 500 A.D until modern times.  Because of the location of the Iberian Peninsula – on the western edge of the European continent and very close to northern Africa, with relatively easy access to the rest of Europe by land and much of the world by water – the people of the Iberian Peninsula traveled, traded, and warred, changing their genetic makeup and spreading their DNA far and wide.

The first thing of note is to know that the Iberian Peninsula, which currently is where Portugal, Spain, and part of France is located, was not always divided this way politically.  These countries did not consider themselves to be politically united in the way that we now know them until modern times.  For example, France, Spain and Portugal still made major changes to their political boundaries well into the 1600-1700’s, not including changes made during the World Wars.

Conflict with the Visigothic, Byzantine, and Arab armies and formation of the genetic makeup of the Iberian Peninsula

The Visigoths were made up of people from the western Germanic tribes.  These people populated Northern Europe, and are called Germanic because of the origins of the languages that they spoke.  The people of the Iberian Peninsula were subjects of the Visigoths for about three hundred years.  Most historians agree that the Visigoths weren’t really hands-on rulers and that they didn’t mix much with their subjects here.  That said, it probably did happen upon occasion.

During the rule of the Visigoths came the Romans – under the control of the Roman Empire, which is also sometimes referred to as the Byzantine Empire.   The Romans had previously been in control of much of the Iberian Peninsula before the Visigoths arrived, so there was lots of fighting and winning/losing of territory throughout the Visigoth rule.  Finally, the Romans were able to temporarily retake control of a small part of the peninsula for less than 75 years.

After the death of a Visigoth king, there was a lot of political conflict on the peninsula and an North-African Arab commander entered Iberia with troops, capitalizing on the unrest.  By 713, most of the Iberian Peninsula was under Muslim/Arab control.  This is an important aspect of history, and extremely relevant to those taking DNA ethnicity tests.

The Arab influence on the Iberian Peninsula has arguably been one of the most extreme outside influences in the history of Spain.  There are thousands of words in the Spanish language that are cognates or have their origins in Arabic.  Science, art, architecture, and more was all influenced dramatically by the Arabs in Iberia.

Even though in 1492 there were only between 200,000-250,000 Jewish people living in Spain, it is important to note that only 200 years earlier, there were around twice that many (perhaps as many as 500,000).  While Jews had historically been tolerated and sometimes even treated well in Spain, this changed drastically between 1300-1400 A.D.   Many Jews were killed or exiled, and those who stayed were often pressured or forced to convert to Christianity.

This is important history, and it is also interesting from a DNA aspect.  Many Spanish families don’t know about their lost Jewish heritage, and the same is true for many of the descendants of the Iberian Peninsula around the world.

As most of you probably learned in school, Spain and Portugal were prolific producers of world explorers.  Beginning in the late 15th century, many explorers, sailors, and soldiers from the Iberian peninsula traveled to many places around the world.  Most important in our DNA story, however, are their trips to the “Americas”.

The Spanish and Portuguese explorers brought their crew and soldiers with them to explore the North and South American continents, eventually claiming much of those continents for their home countries.   These groups of people mixed with the indigenous inhabitants of these “new” lands.  For the next five hundred years, regular folks like you and me, usually suffering from economic hardship or political/religious persecution, decided to leave Spain and Portugal.  These people started families and mixed with local communities North and South America.

Even More Spanish and Portuguese Migration?  Is that how I got my Iberian DNA?

The Spanish and Portuguese emigration to Latin America isn’t the only way that you could have ended up with DNA from these waves of migration.

This is by no means a comprehensive list of every situation where Iberian Peninsula DNA was spread throughout the globe via migration or battle, but I do hope that it does give you something to think about and that it helps you research your family history.

If you truly want to learn where your Iberian DNA came from, the first step is to start building a family tree. Starting with your parents, then grandparents, and further back, it’s a great way to follow the records – using DNA as a guide, of course – to see where they lead.

You never know what you will discover!

I recommend building family trees on Ancestry. It’s completely free to build your tree there (and even share it with family), but you do need a subscription to have access to documents and records that pertain to your ancestors.

I hope that this post helped you understand a little bit more about the people of the Iberian Peninsula.  Do you have Iberian Peninsula in your DNA and have no idea where it came from?  I’d love to hear from you in the comments! 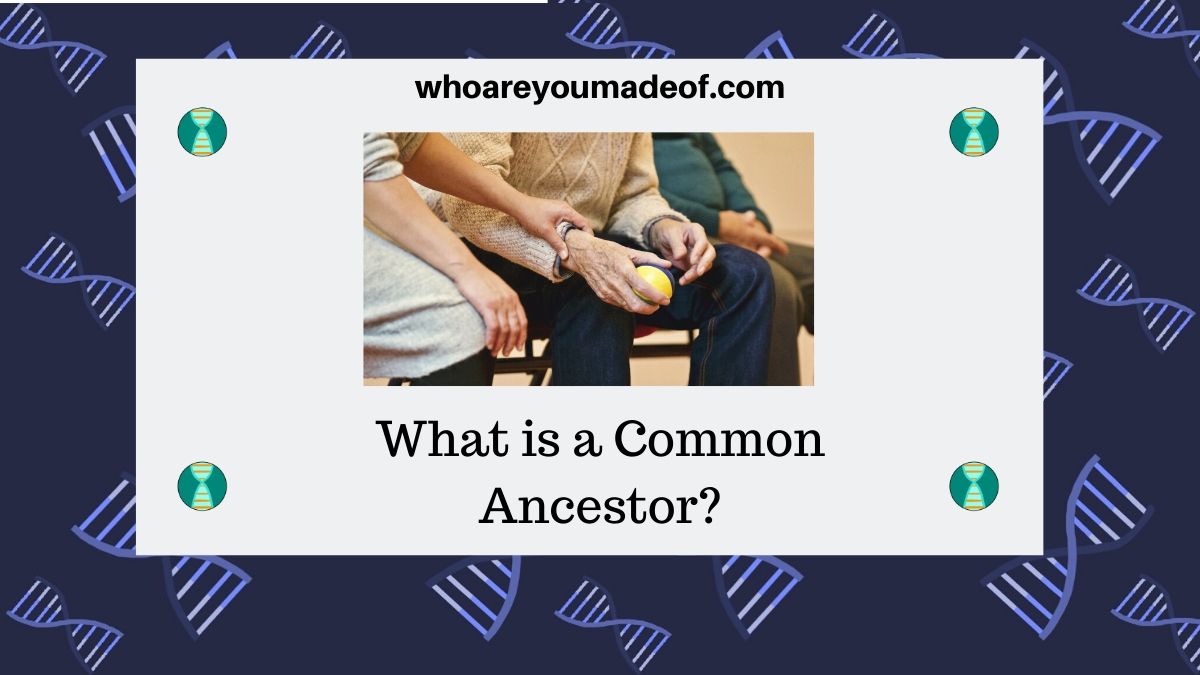 Next →
What is a Common Ancestor?
Click here to cancel reply.

This was very interesting to read and actually cleared up a lot for me! My DNA test showed up 39% Iberian. Which was a complete shock, and some of my family members were even questioning an affair because I didn't have a speck of French according to my results. (We already have family trees done, and found ties to France on my mothers side, and I'm a Boudreaux so you can only assume I should have French on my fathers side as well). I specifically have very deep Southern Louisiana roots, as well as Irish (I was 58%). Louisiana being given to the Spanish by the French makes that make perfect sense. We even have a town here named New Iberia after the Iberian peninsula! So I think it's safe to say Spain would make perfect sense as to where my high Iberian percentage came from! I have always been asked if I was Spanish, and noticed I had an olive tone to my skin and green eyes while most of my family is fairly pale with brown eyes I'm also only 5 feet tall and pretty much a midget compared to everyone else. For some reason I must have gotten more of that than my siblings and close family!

Hi Hannah! Thanks so much for your comment, I am really glad that this article was able to help you. I think that with your French ancestry on both sides of the family, and very extensive Louisiana roots, it is a very logically explanation for such a solid percentage of Iberian. Have either of your parents or siblings done a test? It would be interesting to see the comparison between inherited Iberian in their results, and it would be possible for a sibling to have inherited a much smaller amount. Best of luck tracing your family tree!

Interesting. According to Ancestry.com, my DNA is 13% Iberian Peninsula. My father told me he has a Sephardic Jewish ancestor. I believe him, since he's very Mediterranean-looking, and his brother's son can easily pass as a light-skinned Hispanic person. Some of his other ancestors were also from southern France.

My mother also has Welsh blood, and I'm told that many Welsh people have a relatively high amount of Iberian DNA.

Thank you for this.

My ethnicity via Ancestry.com DNA testing comes out at 9% Iberian Peninsula, really a surprising result. I'm highly British, Irish and Scandinavian, and according to my extensive genealogy I have no Latino/a ancestors at all! My best guess, not confirmed, is that my mysterious great-grandmother, perhaps from Texas, was a Latina. In England today the average Iberian component is only about 3%, one third of mine. Many of my ancestors arrived in America 1650-1800, none were Spanish. Any advice?

A lot of Welch and Irish had Iberian roots. This is a possibility to check into.

Were any of them French Huguenots? Many French also have Iberian DNA; especially if they're from Southern France.

Hi Ales, I definitely see why you are wondering where the Iberian came from. It seems unlikely that you would have inherited so much Iberian Peninsula DNA from your great-grandmother, even if she was Latina. It is unlikely that she had 100% Iberian, since today the average Mexican has 20-25% Iberian (and many much, much less). I use Mexican as an example since Texas was a part of Mexico only a couple generations before your great-grandmother was born. That said, you could have inherited part of your 9% from her (if indeed she was Latina and had Iberian), and the rest from your British and Irish colonial roots. Have you gone through your DNA matches in order to try to trace your great-grandmother's ancestry? Thanks for your comment!