If you are looking at your DNA results and trying to make sense of your DNA matches, you might find yourself wondering how much DNA half-cousins share.  Understanding how much DNA cousins typically share is key in knowing how many common ancestors you share, and can be very helpful in understanding your family tree.

In this post, I will address the shared DNA between half-cousin relationships, focusing on half-first, half-second and half-third cousins, the closest of cousins.

A cousin who is more distant than a third cousin might not share DNA with you at all, whether they are a half-cousin or a full-cousin, so typical ranges of shared DNA are less useful for those more distant relationships.

The closer the cousin, the easier it is to tell whether or not your cousin is likely to be a half-first cousin based only on the amount of shared DNA.

A half-first cousin is a person with whom you share only one grandparent.  Their parent is a half-sibling to one of your parents.

If your grandmother or grandfather had a child with someone who was not your other grandparent, then the children of their offspring will be your half-first cousins.

You will share DNA with 100% of your first cousins, whether or not they are half or full cousins.

How much DNA should I share with a half-first cousin?

As you can see, there is a slight overlap in the range of DNA between full and half-first cousins.  If you share between 515-650 cMs with a first cousin, the only way to tell for sure whether you are full or half-first cousins would be to view close DNA matches that you have in common, or to know how much DNA your parents share.

Close relatives, as well as first and second cousins are useful as shared matches in determining full or half-first cousin relationships, since we will always share DNA with relatives at this distance, if we are truly related to them.

Some people find out that they have half-first cousins accidentally, so I have an example here of how to use shared matches to figure things out in this case:

If my grandmother was unfaithful to my grandfather, then my half-first cousins (the children of my mother’s theoretical half-sibling) would not share my grandfather’s relatives as DNA matches.

Specifically, my half-first cousins should not match my grandfather’s first cousins, their children, or their grandchildren.

How much DNA should I share with a half-second cousin?

You can share as little as 30 cMs or as many as 215 cMs with a half-second cousin.   It’s more diffificult to use only the amount of shared DNA with a second cousin to decide whether you are full or half-second cousins, since there is also an overlap in the ranges:

As you can see, if you share over 75 cMs and less than about 215 cMs with your second cousin, you cannot determine definitively whether you are full or half-second cousins, since this amount would fall in both ranges.

You would again have to see either how much DNA your parents share with each other, gather more data points by having more of your second cousins do a test, or use shared DNA matches to gather more information.

A half-third cousin is a cousin with whom you share only one great-great grandparent.  We all probably have numerous half-third cousins, but we won’t be able to find all of them through DNA testing.

The reason for this is because we will not share DNA with 10% of our full-third cousins, and the chance that we won’t match a half-third cousin is even higher.

If you have a known half-third cousin, and you share no DNA, then you cannot use only this information to decide whether or not you are truly related to each other.

How much DNA should I share with a half-third cousin?

Since there is a 10% chance that you share no DNA with a third-cousin the bottom end of the shared DNA range with a half-third cousin is zero, with a maximum of about 175 cMs.

When you are dealing with third cousin relationships, shared matches are only generally useful in confirming a relationship, but cannot be used in determining that there is no relationship (either full or half) because there is always a chance that you share no DNA with a third cousin, even if you are truly related in a genealogical sense.

As an additional note about shared matches, it’s important to know that the more distant the cousin, the more likely it is that any given shared DNA match is related to your cousin and to you in different ways.

It might sound confusing if you are just starting off, but you’ll get the hang of it!

I hope that this post helped you understand half-cousins and their DNA relationship to you a little better.  If you have any questions about something you read here, or would just like to share your experience with half-cousins on your DNA match list, I would love to hear from you in the comments below. 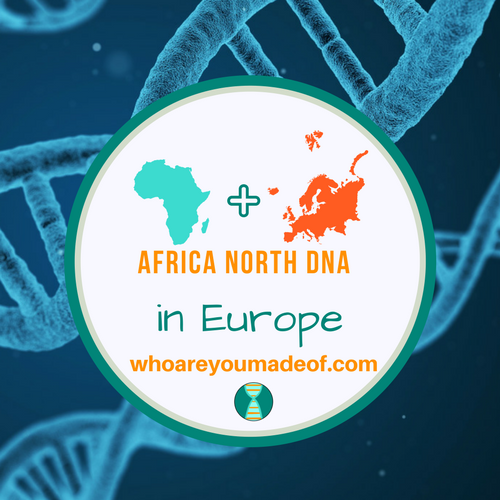 Thanks for the insight, I couldn’t have figured out how to read my moms AncestryDNA report with this. Thank You!

Thank you for your comment! I am so glad that this article helped you. Sincerely, Mercedes

I have a question. My dad has a great grandfather that was not raised by his bio parents. I have identified the family of one of his parents but there are 10 siblings. So far I have identified 8 shared relatives that connect to 5 of the siblings. The DNA shared relatives range from 3rd to 5th cousins once removed. Is it going to be possible to determine which of the 10 siblings is the parent? The DNA matches range from 65 cM down to 20 but the shared relatives are different generations to the different siblings but all connect to the same family. None of the 10 siblings spouses are a parent of my dad’s great grandfather. I’ll stop now because I’m even confusing myself. ?

Okay, I really hope someone can answer this. Been trying to find mom's birth dad. I got a message from a 1st cousin D.C. that said his grandfather is W.C I look at his family tree and it shows we share the same grandfather. I'm thinking could this be my mom's dad? No information on D.C's dad. Later I get something that says 1st 1/2 cousin. Shared DNA 8.36% 623cM 22 segments. Is there another possibility this grandfather would not be my mom's dad?

My granddaughter shares 72cMs (0.96%) with a man that is supposed to be her half cousin. Is that possible?

Hi Rob, 72 cMs would be very low for a half-first cousin match. I hope this helps, Mercedes