One of the most frustrating aspects of doing family tree research with DNA is when you contact a DNA match and get no response.  Sometimes, you can even send a few messages different ways and still get no answer.

In this post, I will discuss a few reasons why your DNA matches won’t respond, and a couple of ideas for next steps.

In my own DNA journey, I have had numerous instances where I’ve sent an e-mail or Ancestry message (or two!) and gotten absolutely no response.  I now understand a little bit more about what might be going on behind the scenes, and know that not everyone shares the same level of excitement about meeting new family and doing family tree research.

Are you building a family tree? How many generations does it go back? Are you building your tree “wide”? Many times, we don’t get responses from our DNA matches because they are expecting us to want them to tell us how we are related.

Or, they might not respond because they don’t know any more than you do.

To get more responses, show your DNA matches that you have your “ducks in a row”, so to speak, and that you have done your research and are willing to be as helpful as possible in moving you both towards your family tree goal.

I recommend building family trees on Ancestry (it’s literally free and easy). You do need a subscription if you’d like to access their extensive collection of records, however.

As it turns out, there are many, many reasons why people don’t answer e-mails and messages on your DNA testing companies messaging system.  When I first started out, I automatically assumed that people were just being indirectly rude to me.

Why wouldn’t they answer my polite e-mails?  I’m a nice, normal, educated person with a family, so why wouldn’t my family want to be in contact with me?

I have had relatively close matches (1st cousins once-removed – 3rd cousins) not want to be in contact.  So what gives?

Isn’t the more the merrier?

It turns out that most of the time, the reasons that we don’t get responses from our matches isn’t personal.  These are some of the major reasons that I’ve seen people not respond to messages (in a vague order of how often they might occur):

Even though they might have good intentions, some people see their messages and never get around to writing you back.  Then, too much time passes and they figure that there is no point in writing you back, or they feel embarrassed.

I am terrible about responding to voicemails, for example.  People leave me voicemails, and I always tell myself that I’m going to call them back, and sometimes I never do.

This type of situation happens a lot with our DNA matches, since not everyone is as interested in family history and communicating with DNA matches as we are. I think that this is the thing that I have the hardest time remembering.

I spend all of my free time working on my family tree, so why doesn’t everyone else? 😉

Some people only did the DNA test because a relative asked them to.

This has been the case in my family.  For example, I have an aunt and uncle who only did the test because all of their siblings were going to do it, and they were curious about which ethnicities would show up for them.

That’s it.  My uncle has never even logged into his account to see his results personally – he’s only seen screenshots of his results.

I hope no one is trying to contact him, because he will never answer.

Sometimes people do DNA testing only interested in finding out their ethnicity estimate, and don’t even know that they will get DNA matches, too!

When I realized that many people who do these genetic DNA tests have no idea that they will actually get matched with their DNA relatives, it really surprised me.

Some people don’t respond to their matches because they either weren’t expecting to get matches, didn’t want matches, or are just confused by the entire thing.

They only wanted their ethnicity estimate

This is extremely common.  It happens that some of our DNA matches knew that they would get DNA matches, but they aren’t interested in talking with matches, or genealogy, and only wondered about their ethnicity.

Once their curiosity about that is solved, they move on – sometimes without even a second thought.

Maybe they didn’t get your message

If you use the messaging system on the testing company website, sometimes their account settings or technical issues prevent them from being notified in their e-mail address.  If they don’t log in to the system often, they won’t realize that they have unread messages.

It can sometimes happen that your DNA match is only interested in a particular aspect of their family tree, and your placement in it doesn’t match with their research interests.

Usually, people will at least give you a polite response if this is the case, but as we all have limited time to dedicate to our hobby, this could be a reason that you haven’t gotten a response.

Family drama.  We all have it.

In my extended family, there is lots of drama (and trauma), and some of my 1st-2nd cousins don’t want to be in touch with me because it reminds them (or their parents or grandparents) of drama that occurred with my parents, grandparents, or even great-grandparents.

Sometimes, hurt feelings (or worse) can take generations to forgive and forget.  For example, I had someone who was administering a kit for one of my DNA matches tell me that my match did not want to communicate with me directly because her father had been mistreated by my great-grandfather.

I’m sad about it, because I feel like this cousin could really shed some light on my family history here in the US, but I have to respect her feelings.

They have completed their research

Less commonly, people create e-mail addresses only for using with their DNA testing and analysis accounts, and once they feel like their curiosity or research has been satisfied, they stop logging in to their e-mail and never see your messages.

They are no longer with us

Unfortunately, our DNA matches can pass away.  One of my dad’s first cousins did a DNA test and sadly died at a relatively young age later that year.

If someone shows as a close match to her, they might agonize looking at the last date that she logged in, wondering why she hasn’t responded to their message.  It’s very sad when this happens, and it’s probably happens more often than we think.

It’s okay if your matches don’t want to communicate

Sometimes, our matches just don’t want to talk to us, for whatever the reason.  It’s okay, and we should respect their decision, even if it means that we never get access to a particular bit of information that they have about our family, no matter how important the information is to us.

We all have the right to decide who we communicate with, and under which circumstances.

It’s important to not take their decision personally.  Their choice not to respond to a message doesn’t have any bearing on our self-worth.

Everyone has their own issues that they have to deal with, and we should understand that they are just walking their journey, doing the best they can.  Just like the rest of us.

And for those of you who are really frustrated because you know that someone has information that you need and appears unwilling to share it with you:  many times there are alternate ways to obtain facts that will help you in your search.

It might take more DNA testing, more e-mails to other matches, and more research, but you can get there.

I hope that you got some ideas from this article that help you understand why you have not heard back from a DNA match.  If you have any questions, or want to share a story here about getting in touch with your matches, I’d love to hear from you in the comments. 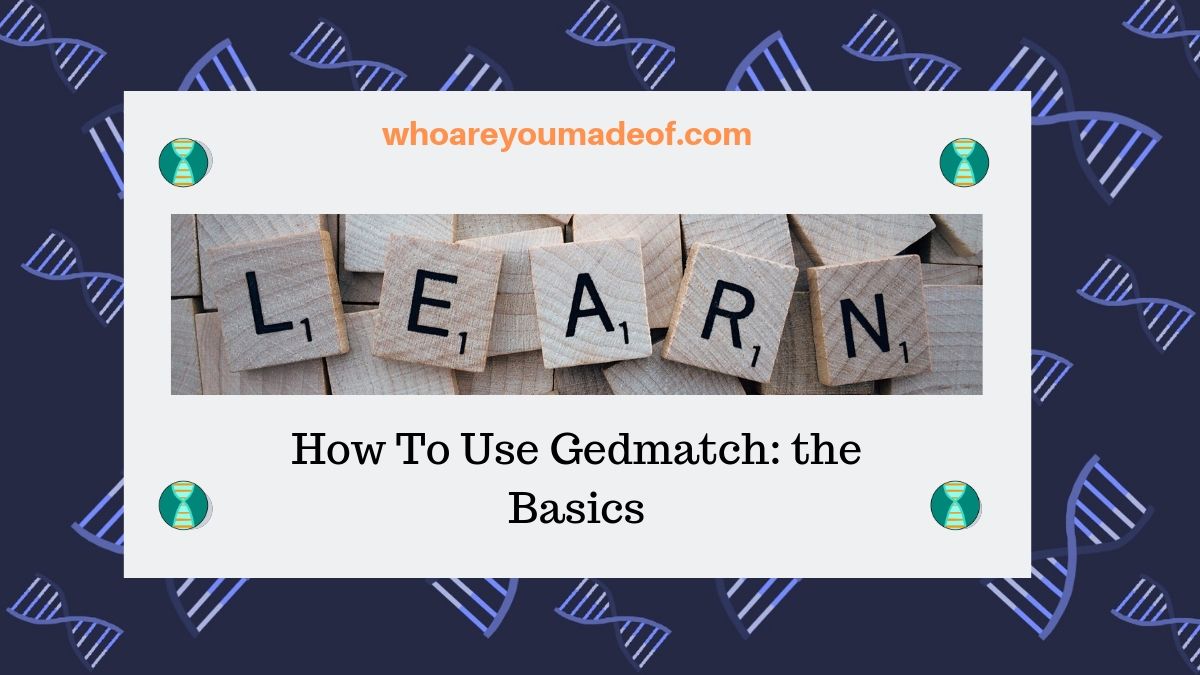 ← Previous
How To Use Gedmatch: the Basics 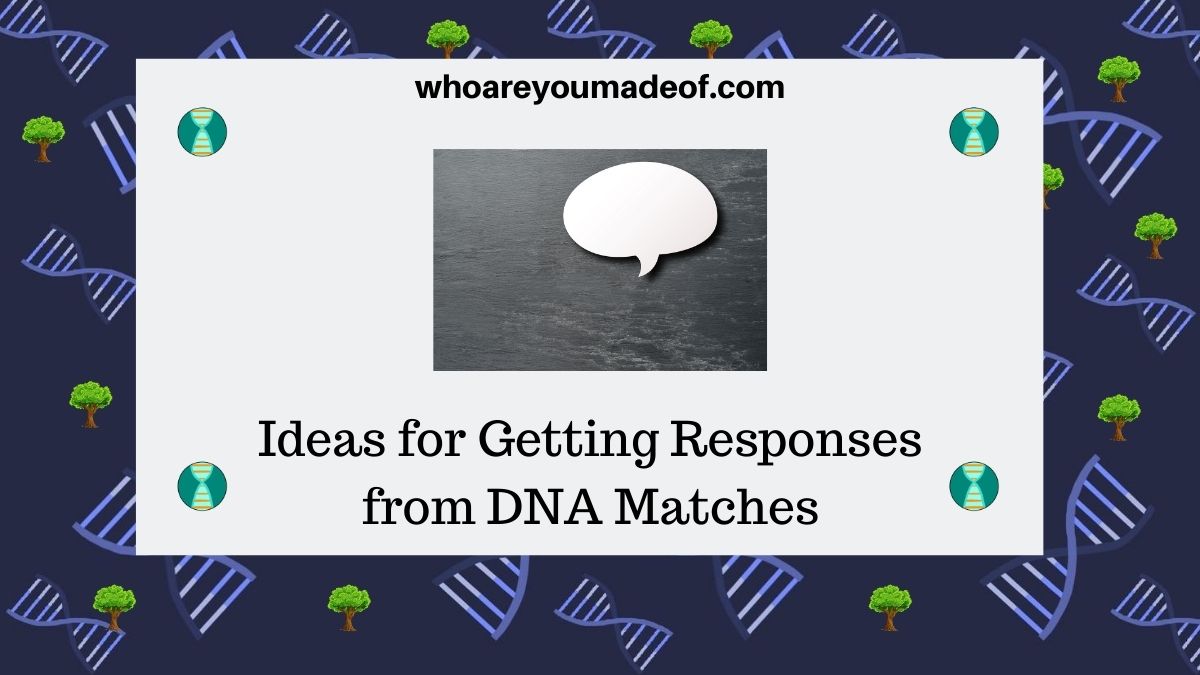 Next →
Ideas for Getting Responses from DNA Matches
Click here to cancel reply.

Good article ! I don't know about my bio father ; I found a half- brother and a half-sister (amazing match !) on MyHeritage and they immediately answered back! They were somehow expecting 'me'. I however I tried to contact distant cousins of bio father family but not a single answer.. grrrrrr :) Amid all the reasons, I think above all it makes people quite uneasy of letting strangers penetrating their family tree (+ possible consequences on family inheritance taxes & capital, you never know ^^)

I feel a bit better after reading this. My father was adopted and I recently found 3 1st cousins. I messaged all of them and it says they read the message but no response. I would have at least liked a hello back and it’s a little sad but there are reasons like you said and I have to respect that. Thanks!

Hi Natlie, I really hope you get responses soon! I know how hard it is to wait and not know if you'll hear back. Best of luck, Mercedes

Mercedes- It just wouldn't be right if nobody responded to a blog about why people don't respond! So, re. family dramas and traumas, they may also include people who were adopted, and who prefer to deal with their findings privately before sharing information with a "stranger." And, as you mentioned, out of the distant DNA matches who DO respond you may well hear back from a few that more than make up for the non-responders. So, I will continue to use some of your suggestions in a different post about making contact and hope for the best.

Thank you so much for your comment, Joseph! I hope that some of my suggestions help - they have really worked for me.